Last Friday we took advantage of the prospect of a sunny forecast to re-visit one of our favourite nature reserves. We were not disappointed. Here is a selection of what we saw. 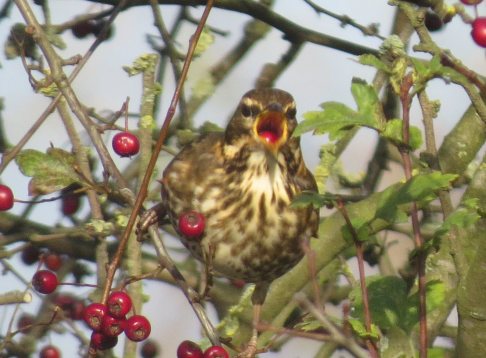 Before we left the car park we saw a redwing feasting the hawthorn fruit – note the one in mid swallow! I was surprised not to see more of these migratory thrushes around the site. By the way we had a fieldfare (another migratory thrush) in the garden last week.

From one of the hides we saw a kestrel perching on a fence post. It then took off to give us a splendid display of hovering.

On the way back from seeing the kestrel somebody pointed out a kingfisher in the bushes. We watched it for some time but it never came out fully into the open. However this is one shot I have severely tweaked to show it with a fish.

From a hide overlooking shallow water and mudflats we were pleased to see a small flock of dunlin. This is a small wader that scurries around looking for crustaceans in the mud.

Another birder kindly pointed out this duck among the teal and wigeon feeding on the water’s edge. It’s a pintail, so called because of its distinctive pointed tail. With its head down it was hard to distinguish from the other ducks but as it paused between beak-fulls its lovely chocolate head, set of by the white marking coming to a point, made it stand out from the crowd.